Recap of part one (see Part I immediately below for the details!): After 23 years of doing business in her garage, Ilene realized she had to make the move and build a new call center. She faced her fears head on and started the building process, making lots of personal sacrifices along the way (including selling her own plasma) to come up with a down payment!

Now, for more of the story:

As hard as Ilene worked to let go of her fears, she still had to face them one by one. For instance, the first architectural drawings of the building included an attached apartment to the call center. Why? Ilene was afraid that she would need the additional income to make the loan payments on the new building.

She began to recognize that she was operating out of fear instead of faith and she KNOWS that fear and faith cannot dwell in the same heart at the same time. She began to read a great deal about surrendering, and her prayers became more meaningful. She is a licensed EFT (Emotional Freedom Technique) coach and she did lots of tapping. Eventually, she was able to calm down, process her emotions in a healthy way, and think logically.

During this process, Ilene had some uneasy feelings about the SBA loan (see Part I). She did some research and found out that she would not be able to pay off the SBA loan early without incurring a huge penalty. This did not sit well with her, and at the last minute she backed out of the SBA loan. That meant that the loan was restructured with the bank being willing to finance 75 percent as long as Ilene could come up with 25 percent of the loan amount. Whew!

To come up with the 25 percent, she decided to take out a home equity line of credit on her home. When the appraisal on her home came in, she found out she was $10,000.00 short of her portion of the loan. She approached the builder to tell him she would have to hold up on the building. To her great surprise and utter amazement, the builder lowered the cost of the building by $10,000.00 and she was able to continue forward. Ilene saw this as a miracle and is still SO grateful to the builder.

The more Ilene continued to surrender her fears, the more miracles she saw. A small, but profound, example is the timing of snow during the construction process. The builder couldn’t get the asphalt poured until after a certain point in construction. However, winter was coming and the local asphalt companies stop pouring after the first snow fall and don’t start pouring again until spring. If we didn’t get the asphalt poured before that first snow storm, this one simple thing would put a 2-3 month delay in the completion of the construction. The weather held and the asphalt was poured just days before the first snow. Even the builder was amazed that it all worked out that way!

We moved into our new building on February 15, 2016 and we didn’t shut down the business for even one minute. But more about that in Part III !

As we look back at where we started compared to where we are now, we cannot help but be grateful for the many blessings and opportunities that have come our way. One of our biggest blessings, and a huge miracle, is that two years ago we moved into our new building. We still continue to be in awe of the miracle of our new building and the growth we have experienced since the move.

For 23 of our 25 years, Call Center Plus was located in a converted garage in a residential neighborhood. In 2014 we began to feel some real growing pains as the city started putting some serious restrictions on the business, such as the number of employees we could have in our little garage space at one time. Ilene came to the realization that she was going to have to move the business out of the garage and that was very scary for her!

Ilene’s first (and least scary at the time) option for moving the business was to find a place to rent. However, it didn’t take long to realize that the cost to rent AND to renovate an existing building was not a smart move financially. So, she started looking for an existing building to buy and remodel. Again, she quickly realized she would have to spend a whole bunch of money and would still not end up with the building she wanted. She finally realized that the smartest (but scariest) thing to do was to build a new call center.

Ilene searched for property and found a .59 acre lot in Logan City. She met with the realtor of the lot and he advised her as to what he assumed the cost of the building would be. It was a frightening figure but she decided she could do it. She got serious about moving out of the garage and into a new building! It’s probably a good thing that she didn’t know at the time that the real cost of the building would be double what the realtor thought it would be. She put a down payment on the lot and started talking to architects and builders.

Ilene chose a builder and he recommended an architect. After working with both of them for several weeks, she developed a bad case of cold feet and backed out. She then began working with a different builder and architect. From this decision, she learned that sometimes, the only way you know you are on the right path, is to go down the wrong path for a just a bit. Within a very short time, Ilene realized the second choice in builder AND architect were definitely the wrong choice! She went back to the original builder and architect and is SO grateful she did!

Ilene’s biggest fear was the thought of going into debt. All through the history of the business, she has worked hard to pay cash for everything and to stay away from debt. The very thought of taking out a business loan was almost paralyzing. As she began the process of procuring a loan, Ilene was advised to take advantage of a small business (SBA) loan. She was told the first loan would cover 60 percent of the building costs, the SBA would cover 30 percent, and she would be responsible for 10 percent of the costs as a down payment. In order to come up with that down payment, Ilene started selling everything she had, including her beloved truck, her 4-wheeler, her piano and her own plasma! That’s right! She donated plasma at least twice a week for months to help raise the down payment. Talk about BLOOD, sweat, and tears!

These small, but significant,  sacrifices are the just the beginning of the story!

Stay tuned for Part II to find out more!

Welcome to Call Center Plus!

Send Yourself a Test Message

1. Imagine how this form could work for your business

2. What information would you want us to gather from your customers?

3. The options are limitless

Click here to see a sample Answering Service Messaging Form and send yourself a test message.

Winner of “Spirit of Entrepreneurship” Award 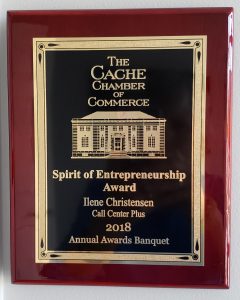 Increase Your Business with Call Center Plus!

We are available 24/7 so you don't have to be. You never have to miss another sale or call when you sign up with us!

Did we say we are there to answer your phones day and night, night and day? Even during Thanksgiving dinner…or on Christmas Eve…or any other time or day you can’t be there. We are always there!

This site is secured by: